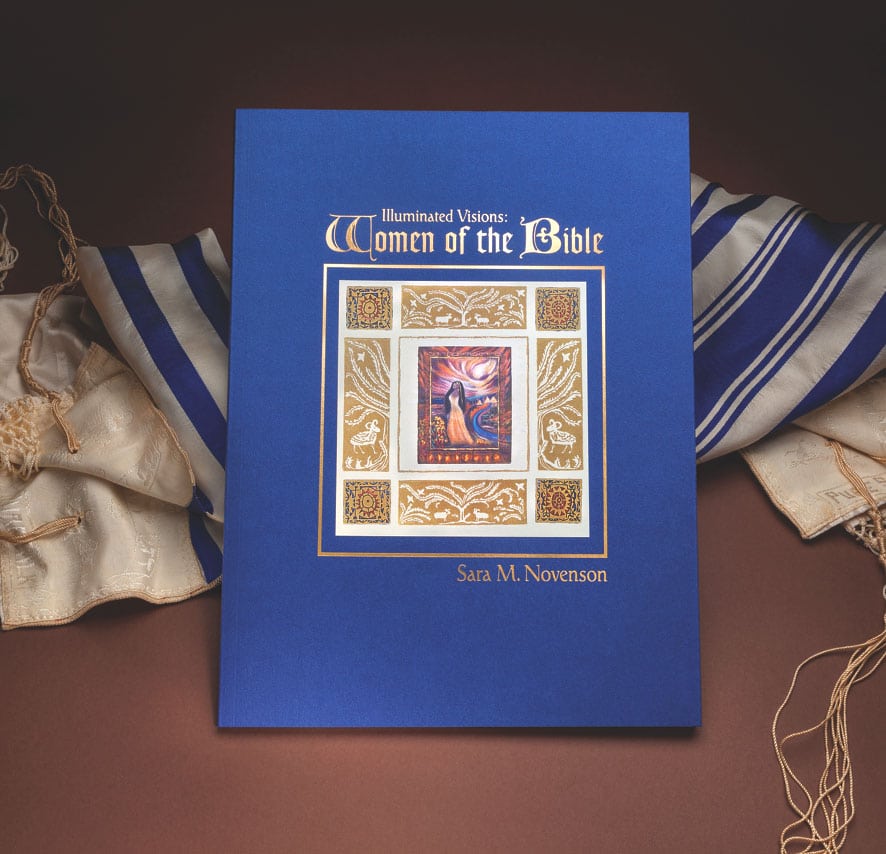 Foreword for “Illuminated Visions, Women of the Bible”

I met artist-of-light Sara Novenson by chance, if there is such a thing. Our Jewish ancestors might say that the meeting was beshert, predestined. My husband-to-be and I were strolling down Canyon Road–a world famous row of internationally acclaimed art galleries in Santa Fe, NM–early in the new millennium. Drawn like iron filings to a magnet, we found ourselves in Sara’s beautiful gallery reveling in her luminous southwestern landscapes and magnificent Jewish themed art.

Miraculously there she was, the artist herself, rather like a living crystal whose inner essence was projected into material form in the paintings that graced the space. We were captivated.

Sara’s art is an epiphany, a portal to a timeless realm of mystery, magic, and soul. The graceful figures, the bold flowing colors, the perfectly executed Hebrew letters. Even before the conscious mind apprehends the subject of her paintings, the other-than-conscious mind is already filled with reverence and delight.

In 2001, not long before Sara and I met, my book, A Woman’s Journey to God: Finding the Feminine Path was published. In Jewish Sunday School we grew up hearing the stories of the three patriarchs: Abraham, Isaac, and Jacob. Their respective wives-Sarah, Rebecca, Leah, and Rachael-also had fascinating stories. The women’s stories, however, were relegated to footnotes in biblical history rather than honored as the archetypal stories that they are, stories that can inspire and guide a woman on the path of soul growth.

There is a story in the Talmud, a compendium of Jewish laws and commentary, that celebrates the role of women. When Moses led the Jews out of slavery in Egypt he climbed Mt. Sinai where G-d gave him the tablets inscribed with the Ten Commandments. Moses was gone for 40 days and 40 nights. In his absence, the people became frightened and asked Aaron to create an idol of a Golden Calf, an image worshipped as a deity by numerous mideastern cults. The women refused to participate (they held onto those gold earrings rather than allowing them to be melted down) and were rewarded with their own holiday, Rosh Hodesh, the new moon, which is the beginning of each month in the Jewish calendar.

The women kept the faith. That much we know. But what we don’t know, what was lost in oral history, were the stories that informed that faith. It is those stories that Sara brings alive through her paintings and commentaries on the women, the symbology represented in her depictions, and the infinite essence that flows through her hand and takes shape as color and form.

This process of transforming light is described beautifully in a midrash on the moon, written by Hasidic Rebbe Isaac of Homil:

“The moon, when she was first created, was a glistening jewel. She did not merely reflect light, but rather transformed it and brought out its inner beauty, much as a precious stone glistens with a secret, hidden light all its own. In her own way, the moon was greater than the sun – for the sun only shines from its surface, whereas the moon shone from its inner essence. The sun holds the light that extends outward, whereas the moon holds the light of being.”

Sara Novenson’s paintings of The Women of the Bible are like the moon in its first creation. They shine with the inner light of being, bringing that same light alive in each person who chooses to receive the divine transmission that they hold.

As you meditate on each painting may it awaken your soul, fill your heart, and bring strength, mercy, compassion and all the feminine qualities of being more fully into your life.

Thank you, Sara, for this extraordinary gift of inspiration.

Return to the Book